The battle for a public education system in the USA

Well America will now have billionaire Republican campaigner for charter schools, Betsy De Vos, as the next Secretary for Education.

So the fact seems to be that for many on the conservative benches apparently it makes more sense and would be better if there wasn't a secretary of education at all..

So is this just going to be assault on public education ?

Well this sounds great to those who are keen to point out that if one reads the constitution there isn't any reference to education policy as an enumerated power of the federal government.

But for some American parents and certainly some teachers, this might just be the last straw: 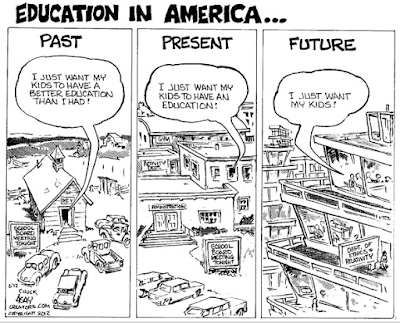 And this goes back the argument in my previous post about Ben Carson. I touched on decentralisation as it appears as the common solution to all political problems in the USA, as it is generally proposed that it acts to limit and divide power to protect individual freedom and civil society. And this is seen as a good thing in general.

So how do Americans understand public education? How true is claim that the US constitution does not render public education as a competency of the federal government? See here:

As the link above shows, a good reason why there is no direct mention of public education in the Constitution is also because public education as we know it in America did not exist until the 1850's. At the time of the Constitution's adoption in 1787 the only "public" schools in existence were known as common schools, schools run by local communities.

The closest thing to federal involvement in education at the time was a requirement given for an adequate system of instruction to be in place for a territory to be admitted to the Union. This was known as the Northwest Ordinance of 1787, and the article in question went as such:

"Art. 3. Religion, morality, and knowledge, being necessary to good government and the happiness of mankind, schools and the means of education shall forever be encouraged."

Hence you have these regressive views held by many on the right in America, which like to suggest that a Federal Secretary of Education is a contradiction in itself:

However, they like to overlook that the path towards a non-discriminatory federal public education system in the United States has been achieved since then through the passing of numerous Supreme Court decisions and federal government laws that impact public education, providing greater equity for citizens.

And as this 2011 study points out this process has stalled to the point of the current deadlock based upon a historical disagreement upon the role that federal funding should play in public education:

"The importance of education for the common good has shifted from primarily local control to state and national control, with national attention from the Federal government and national organizations. Congress is currently embroiled in a debate and stalemate over the reauthorization of ESEA, the 2001 NCLB. Major issues include the purpose and role of the federal government in education, funding, and the extent to which the federal government should play a role in public education. Areas for national debate involve school choice, accountability, teacher quality, goals, standards and above all, funding."

.. and while it was written a while back it seems still broadly accurate: 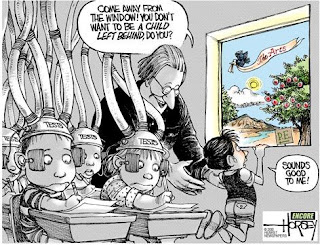 So fact that Betsy De Vos is a proponent of charter schools is not a huge leap, as both Democrats and Republicans fall into this camp. And in fact it was the Republicans who originally put in place legislation to bring in the NCLB agenda further centralising education provision.

So De Vos is mostly known as a champion of school choice. But beyond that differences between her vision and that of the Democrats remain to be articulated strongly.

However, the proposal that is on the horizon for education in the USA is a full scale return to decentralised education, with a stronger focus on redirecting funding. In short this would involve:

A $20 billion block grant to expand charter and private school options for low-income children. Earlier Trump announced in his campaign that this money would come from redirecting existing federal funds, and he would leave it up to states to decide whether the dollars would follow children to public, private, charter or magnet schools.

The Democrats reaction to this was to point out that it would “gut” nearly 30 percent of the federal education budget to fund private school vouchers, and “decimate public schools across America.”

For more details on that also see here:
https://edsource.org/2016/trump-names-betsy-devos-new-u-s-secretary-of-education/573207

I think to make the point a little sharper, this article puts it bluntly; "Trump’s proposals, if enacted as proposed, would end public education in the United States"

"The struggle educators face within the political process mirrors that of the system at large. Teachers are told they must pick the lesser of the two evils. But attacks on public schools have intensified in the last 20 years under Democrat and Republican presidents alike. Educators must be prepared to partake in mass mobilizations in cities throughout the United States. Teachers must show solidarity across state lines while building coalitions with students and parents. It is not just Republicans and Trump we are up against, it is also the Democrats and the whole capitalist system and its never-ending zeal for profits."

..but if you want to hear from someone who really knows about this, someone who has worked at the coalface of US education for some time and has written plenty about the common core and charter schools that I'd recommend looking at is Chad Sansing and his blog in the US:

Or otherwise try reading the counter dialogue from organisations in American that exist to protect public education, like the Horace Mann League:
https://flipboard.com/@jmckay/education---hml-cornerstone-tv3b38raz

Whatever happens it seems these will be harsh times for educators in the USA for the next 4 years.
Posted by fishytom at 1:52 PM No comments: Links to this post